Skip to content
The Department for Transport (DfT) has announced a multi-million pound funding for the biggest road construction project in Worcestershire for decades.

The main road bridge (Carrington Bridge) en route from West Worcester to the M5 will be turned into a dual carriageway in a project that is costing more than £60 million.

Jesse Norman MP, Parliamentary Under Secretary of State for Roads, Local Transport and Devolution, has been in Worcestershire to make the announcement that £54.5m has been secured for Carrington Bridge.

Dualling the bridge forms part of the wider A4440 Southern Link Road improvement scheme which will relieve congestion, reduce journey times and improve journey time reliability, as well as being an important boost for the local economy.

Councillor Simon Geraghty, Leader of Worcestershire County Council, said: “This is fantastic news for Worcestershire. It will complete one of the County’s biggest capital construction projects. The expansion of Carrington Bridge will enable us to dual all the way from the west of Worcester to the M5. It will improve journey times and the reliability of the network. It will be a big boost for Malvern and it will reduce traffic congestion in Worcester.

“Worcestershire already has one of the fastest growing economies in the country and the completion of the Southern Link Road will make the county even more attractive as a place to live, work and invest.”

The Southern Link Road is a key road linking the M5 Junction 7 and the western side of Worcester.  Phase 4 of the scheme includes dualling the road between Ketch and Powick, including Carrington Bridge. Construction is planned to start in 2019.

It sees 30,000 vehicles drive along it each day and is one of the county’s most congested roads. The first two phases of the planned improvements have been delivered and construction of the third phase started in October 2015.

As well as funding for Carrington Bridge, the Minister also announced an extra £6.6 million to help to ease traffic congestion in Worcestershire. This investment will seek to improve walking and cycling routes in Worcester town centre and Bromsgrove.

The £6.6m complements millions being invested by Worcestershire County Council into easing congestion. 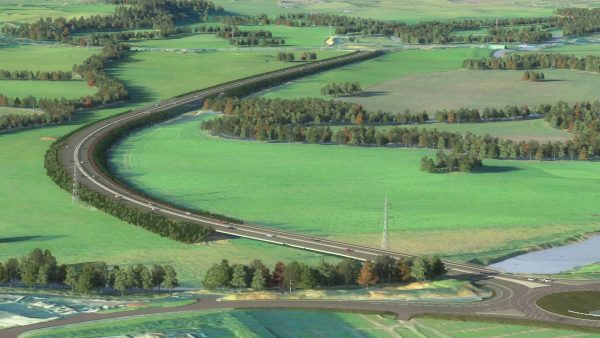 Pictured: An artist’s impression of the dualled Carrington Bridge