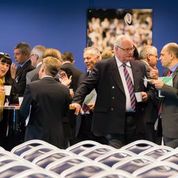 An audience of 300 business people from around the county attended the WLEP Annual Conference held at Worcester Sixways  on October 10th.

Delegates heard updates from the LEP’s Executive Chair, Peter Pawsey, who outlined progress against objectives set in its 2012 Business Plan.  He also used the occasion to premiere the LEP’s new promotional film, targeted at inward investors.

Reports were heard from the four heads of the LEP’s Strategic Objective Subgroups.  Kate Moss, Director of Communications & Participation at the University of Worcester, provided an update on work being undertaken to raise the profile of Worcestershire.  She urged delegates to champion the county as a great place in which to invest, work, live and play.

Carl Arntzen, MD at Bosch Thermotechnology Ltd, heads the LEP’s Employment and Skills Strategy Group.  He focused much of his speech on the work currently being undertaken in the county to connect businesses with schools.  For example, a new web portal to match students’ work experience aspirations with businesses able to help will shortly be piloted in the county.  Mr Arntzen urged local businesses to sign up to the initiative.

Roy Irish, Director at Financial Partnership & Support Ltd, as leader of the Access to Finance Strategy Group,  pointed delegates  in the direction of the LEP’s new Access to Finance portal.  Here can be found details of Worcestershire’s financial specialists and guidelines on how to access various routes to funding.

Jacqui Bayliss, Director at Harris Lamb Property Consulting and head of the Planning, Development and Infrastructure Strategy Group, focused her attention on the LEP’s Planning & Development Charter.  This aims to ensure that Worcestershire has a business friendly planning culture that will help to attract future investment to the county.

Clare Marchant, Assistant Chief Executive of Worcestershire County Council, was joined on the platform by Paul Walker, Managing Director at Malvern Instruments, to outline the ‘Next Generation’ initiative which has been developed by the Shenstone Group.  This encourages long term forward planning by asking us to picture Worcestershire in the year 2040.  The initiative has identified 25 priorities and delegates were urged to go away and consider how they and their organisations could contribute to the county’s long term strategic goals.

Billed as ‘Worcestershire’s Champion in Government’, Emma Ward, Executive Director at the Department for Business, Innovation & Skills, provided a provocative speech that asked Worcestershire to consider its place alongside other similar counties.  She urged Worcestershire to set out its competitive stall, differentiating itself and demonstrating its capacity to deliver growth using available resources.  This would necessarily lead to cross-boundary relationships, private/public sector partnerships and cooperation between County and District Council boundaries.

Worcestershire’s place in the formation of modern America was the subject of Ben Humphrey’s Presentation.  This history provides the county with huge potential to attract  American tourists in particular, but more generally Mr Humphrey, who is Associate Director at Worcestershire Rep, stressed the economic  benefits of Worcestershire’s culture and heritage.

A presentation by Professor Karl George of the Governance Forum offered useful advice on how to ensure  Boards’ competence.   By avoiding the pitfalls of ‘group think’, conflict, too much involvement in operational issues and of passivity, Boards should become both individually and collectively more competent, he said.

There was a strong creative element to the conference, provided by Ben Humphey, Chairman of the Worcester Festival and of the Civil War Society who reminded and educated the audience on Worcester’s vital role in establishing democracy, particularly in the USA. The surprise of a dance performance by Katie Love and friends rounded off this session alongside the more conventional elements of the morning.  Films portraying how the LEP had helped Worcestershire businesses also formed the backbone of its Executive Director’s, Gary Woodman’s, presentation.  Evesham Vale Growers, the Worcestershire Cricket Club and the new Hoobook Link Road in Kidderminster were all featured. 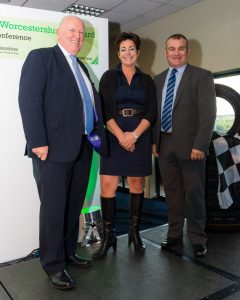 Picking up on Emma Ward’s presentation, Mr Woodman spoke about Worcestershire’s future and described the LEP’s on-going development of its Growth Plan for submission to Government by Spring 2014 and its bid for European funds, recently submitted.   In response to a question from the audience, he confirmed that the WLEP would be doing all it could to secure its full share of European funding, which had been notionally set by Government at €68.1 million for the period 2014 to 2020.

Contributions to the programme were made by two local businesses.  Brinton’s Carpets’ Global Commercial Sales Director, Emma Fletcher, talked about the company’s recent turnaround and now dynamic growth with circa 80% of Brinton’s sales going to clients outside of the UK, following its acquisition by The Carlyle Group in 2011.  Rhys Humm, Director at Holywell Malvern Spring Water, was equally inspiring in recounting the company’s meteoric growth and future export plans.

The proceedings throughout were  facilitated by former champion rally driver, Penny Mallory, who likened her experiences to those of a business, stressing the need in both circumstances to plan, innovate and develop in order to survive and grow.

Summing up the day, Worcestershire LEP Executive Chair, Peter Pawsey, urged the LEP and its partners to be bold and to be brave in putting forward its proposals and its funding bids to Government, for if not the support will go elsewhere, as will the jobs and the potential boost to Worcestershire’s economy.