New business opportunities will be created as a result of a key agreement being signed by one of China’s most rapidly growing regions and Worcestershire County Council, according to the Leader Simon Geraghty.

Cllr Geraghty also said that the Memorandum of Understanding between the Council and Huizhou City will also encourage inward investment into Worcestershire in the future.

Looking ahead to the future, Cllr Geraghty said: “This is the first step towards strengthening our ties with one of China’s most rapidly growing regions.

“Going forward it will help open up new business opportunities and encourage inward investment into our County from parts of the world that will be hugely influential in the future.”

A delegation of leaders from Huizhou City, which is in the Guangdong Province of China, visited the County on Monday, December 12.

The group, made up of public sector officials and entrepreneurs, were given a tour around the County, including key development sites such as Worcester Six and Cathedral Plaza before hearing more about what makes Worcestershire world class in terms of the skills and businesses we have within the County. The two parties then signed the Memorandum which will focus on forging closer links on the economy, culture and education.

The Memorandum is not legally binding, but is a commitment between Worcestershire and Huizhou to strengthen economic, cultural and educational links.

“We received an email saying how impressed the delegation were with Worcestershire; with our environment, our beautiful county and our friendly and welcoming residents.

“This is a first stepping stone with the next step being a business-to-business visit of a Worcestershire delegation to Huizhou to explore new opportunities.”

Huizhou is a regional leader in high-tech manufacturing, including LED and HD Televisual technology and economic links with Worcestershire will benefit local businesses. The Huizhou delegation included several entrepreneurs who met with prominent local business figures.

Cllr Geraghty also stressed that this is a working cross-party effort throughout the County and with the District Councils, building on foundations laid by the Worcestershire Local Enterprise Partnership (LEP) and Worcestershire Ambassadors.

Gary Woodman, Chief Executive of Worcestershire Local Enterprise Partnership, said: “It is great to see the developing relationship between Worcestershire and Huizhou, and the signed Memorandum of Understanding represents a significant commitment to our future partnership.

“This relationship helps to raise the international reputation of our County and its fantastic businesses, education system and tourism offer. I am confident that our growing relationship with the expanding region of Huizhou will be hugely beneficial to our local economy, by creating new international links among our innovative businesses and increasing inward investment.”

As well as economic similarities, Huizhou and Worcestershire have a common agricultural and environmental significance. Huizhou has a vast agricultural economy (which mainly supports neighbouring Hong Kong) which Cllr Geraghty likened to Worcestershire’s status as a premier agricultural county and renowned producer of quality salad and vegetables. 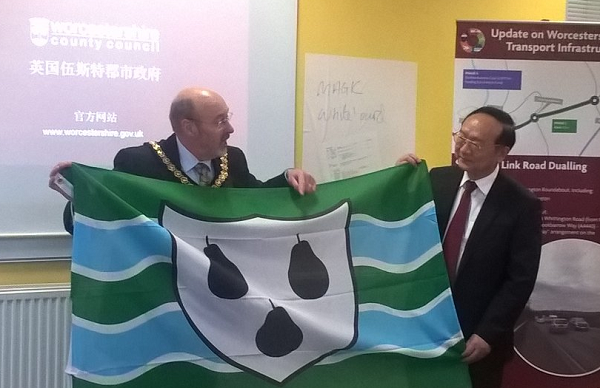