The Competition and Markets Authority (CMA) is calling for more whistle-blowers to expose business cartels with the launch of a national awareness campaign.

The campaign launches as new research shows many firms in the Midlands don’t know enough about how to comply with competition law.

The CMA’s latest cartel awareness campaign aims to educate businesses about which practices are illegal and urges people to come forward if they suspect a business has taken part in cartel behaviour, such as fixing prices or rigging contracts.

Research released by the CMA to coincide with the campaign shows that of companies surveyed in the Midlands:

In 2016, the CMA found that two businesses based in the Midlands that sold posters and frames on Amazon Marketplace had participated in an online price-fixing cartel. They had agreed that they would not undercut each other’s prices and used automated re-pricing software to give effect to the cartel. One business was fined over £160,000 and its managing director has given an undertaking not to act as a director of any UK company for 5 years.

Douglas Cooper, a Project Director at the CMA and regional champion for the Midlands said: “Businesses must educate themselves on what competition law means for them. Fixing prices, agreeing with competitors to divide up and share customers and rigging bids for new work are behaviours that damage the economy and cheat customers out of a fair deal. The consequences if you are found to be involved in a cartel are severe. It’s better to be safe, not sorry as getting caught is not worth the gamble”

The campaign is targeting industries including construction, manufacturing, recruitment, estate agents and property management and maintenance. These are sectors identified as particularly susceptible to cartels. Previous campaigns have driven a 30% rise in the number of tip-offs to the CMA’s cartels hotline.

The campaign uses simple imagery on social media sites and a dedicated website and comes as the CMA continues to step up its enforcement action. Since April 2015 it has issued over £155m in fines following investigations into anti-competitive practices and it is currently investigating 15 cases including in construction services, roofing materials and estate agency.

To find out more information on cartels, visit the dedicated Government website here. 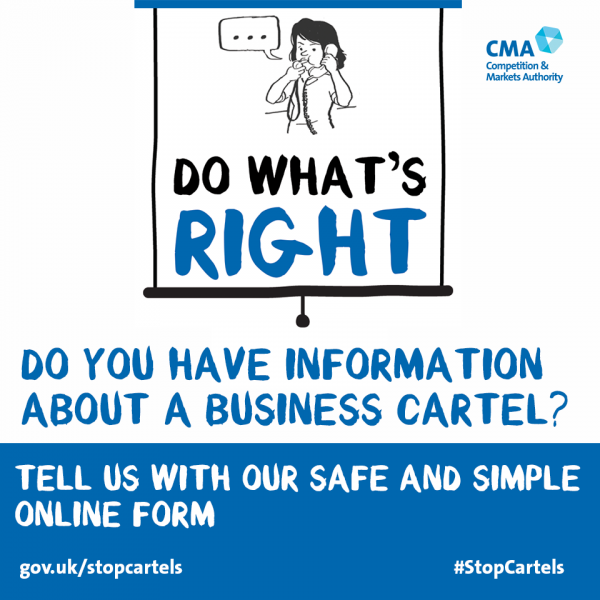