Construction of two large industrial units could soon get underway at Worcester Six after planners gave the important development the green light.

Liberty Property Trust and Stoford Developments were granted detailed planning permission by Wychavon District Council for units of 160,000 sq ft and 45,000 sq ft, which will be the first to be built at Worcester Six.

The site, just off junction six of the M5, will provide up to 1.5 million sq ft of accommodation in a range of high quality business units. They have been designed for a variety of employment uses including technology, manufacturing, industrial and warehousing.

Worcestershire County Council expects the wider £120 million park to create around 5,000 jobs once the whole development is complete.

Work on a £10 million infrastructure package for the park is also making good progress with the upgrade to Pershore Lane now complete. These works were funded by the Worcestershire Local Enterprise Partnership through the Government’s Growth Deal to improve traffic flow to Junction 6 of the M5 motorway as well as provide access to Worcester Six.

Stoford director Gerard Ludlow said: “We’re delighted with Wychavon District Council’s decision to approve plans for Worcester Six. The scheme is the first large-scale development designed to capture local and regional demand in the Worcester area for more than 10 years and with this planning approval, we are a step closer to delivering the new buildings in 2017.”

Andrew Blevins, managing director of Liberty Property Trust added: “Worcester Six is a fantastic investment opportunity for local technology-based businesses looking to expand their offering in the area. Wychavon District Council’s decision to approve planning on the site is yet another example of the strength of the Midlands property market and a sign of things to come.”

Councillor Ken Pollock, Cabinet Member with Responsibility for Economy, Skills and Infrastructure at Worcestershire County Council said: “We at the County Council are very pleased with today’s decision. Worcester Six gives us the chance to create thousands of jobs and in addition it will demonstrate that the County is a first class place for development and investment. We look forward to welcoming high tech businesses to occupy the units becoming available in this next exciting chapter for Worcester Six.”

Gary Woodman, Chief Executive of Worcestershire Local Enterprise Partnership, said: “Today’s decision is great news. Worcester Six is a fantastic site which is suited to a range of industries, including digital and technology companies.

“For any company that is looking for a new location for their business, which benefits from unrivalled transport links, then Worcester Six provides an opportunity not to be missed.” 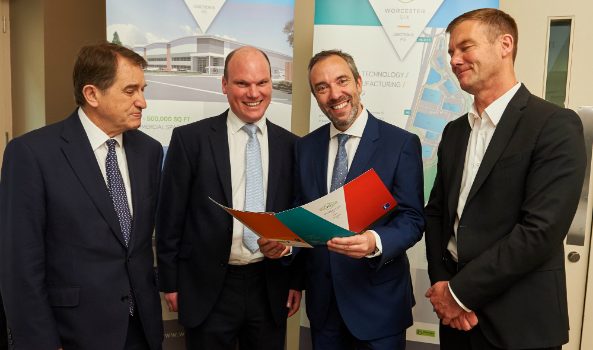 Pictured: Andrew Blevins (second from right), of Liberty Property Trust, and Gerard Ludlow (second from left), of Stoford, are joined at the launch by James Donald (left), of Strutt & Parker, and Mark Stansfeld, of Worcestershire LEP (right) at the London launch of the Worcester Six development.