The main Kidderminster Station building is set to be demolished this week as part of major upgrade works – half a century on from when it was first built.

Demolition of the old building will make way for the brand new, glass-fronted building that will be double the size. The new building will be much better equipped to deal with the nearly two million passengers that use the station each year, a number that is set to increase – already making it the second busiest station in the county.

Councillor Ken Pollock, Worcestershire County Council’s Cabinet Member with Responsibility for Economy and Infrastructure, said: “The demolition of the old station building marks another key milestone for the scheme. There will be lots of activity over the coming months with visible progress on site. Following the installation of the temporary ticket office and changes to the forecourt arrangements, the station building will be demolished over the course of a few weeks to make way for the much improved station building which will support the predicted increase in passenger numbers over the coming years.”

The small brick building was built back in 1968 and, at the time, replaced a mock Tudor building that had survived for nearly 100 years before it saw its demise at the hands of dry rot.

First opened back in 1852, the station at Kidderminster was part of the extension of the Evesham to Stourbridge section of the Oxford, Worcester and Wolverhampton Railway. The line was engineered by the famous Isambard Kingdom Brunel and was later absorbed into the Great Western Railway in 1863. The popularity of the station has meant it has stood the test of time.

Councillor Fran Oborski, Deputy Leader and Wyre Forest District Council’s Cabinet Member for Economic Regeneration, Planning and Capital Investments, said: “The redevelopment of the railway station is a key element of our ReWyre transformation programme for Kidderminster. The transport theme is all about creating a highly accessible town and enhancing transport connections to the wider region. It is great to see this vision becoming a reality. The demolition of the existing station brings us another step closer to creating an attractive station which will meet the needs of residents, visitors and workers.”

Most of the funding for the new station has come from the Local Growth Fund via Worcestershire and Greater Birmingham and Solihull Local Enterprise Partnerships, recognising the positive impact that the new station will have on the local economy. A contribution has also been made by Worcestershire County Council and Wyre Forest District Council

Gary Woodman, Chief Executive of Worcestershire Local Enterprise Partnership, said: “We’re excited to see the progress that is being made towards the construction of a modern new train station for Kidderminster. It was important that we invested in this modernisation, as we know that the station is used frequently by so many businesses inside and outside of the county. We know that the brand new glass-front building will look fantastic and provide a much better customer experience once it’s complete.”

Chris Loughran, Deputy Chair of the Greater Birmingham and Solihull Local Enterprise Partnership, said: “We are delighted to see plans for the transformation of Kidderminster Railway Station truly underway. Part funded by the Local Growth Fund, this is an excellent example of how the fund works for the benefit of the local community and regional economy. The redevelopment of the Station upgrade will improve connectivity, accessibility and capacity – all key priorities for the Greater Birmingham and Solihull Local Enterprise Partnership. We look forward to working with our partners to deliver what will be a major and important infrastructure project to the region.”

Once the construction works and handover period are complete, the station will be managed by West Midlands Trains, as with the old building and the temporary ticket office.

Richard Brooks, Customer Experience Director for West Midlands Railway, said: “The demolition of the existing station building marks an exciting stage in this project, which will improve the travelling experience for passengers, create a more welcoming gateway to the Severn Valley Railway as well as boosting the local economy.

“West Midlands Railway recently introduced new early morning and evening services to and from Kidderminster and with new trains on the way as part of our major £1billion network investment programme, these are exciting times for our passengers.”

Marc Riley, Construction Director – Rail for Buckingham Group Contracting Ltd, said: “Demolition of the existing station is a critical milestone in the development of the new station facilities. We are working closely with Worcestershire County Council, SLC Rail and West Midlands Trains to minimise disruption for passengers, whom we thank for their patience and support, ensuring that Worcestershire remains open for business.” 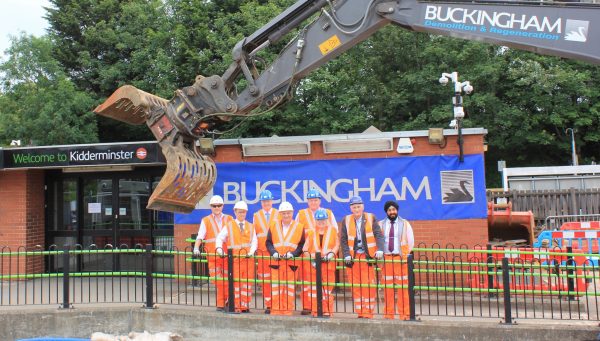 A Worcestershire-based outsourcing specialist has announced plans to double in...

Local businesses and residents are being made aware of the...