Worcestershire’s fastest growing mid-sized companies have generated a total of £2.4bn in revenues in the last year, achieving 64% growth over a three year period, according to the Worcestershire Growth Barometer report published today by accountancy and business advisory firm BDO LLP.

This is the second annual Worcestershire report which identifies the 50 fastest growing mid-sized companies based on average turnover growth.

The list includes companies from across eight different sectors, with retail and leisure companies making up 30% of the top 50 companies, closely followed by the manufacturing and engineering (26%).

Analysis of the sectors showed that manufacturing and engineering has seen the most significant turnover growth at 40% over three years, with retail and leisure in second place with revenues up almost 30%.

These two sectors also took top position for job creation, creating almost 10,000 jobs between them and accounting for more than 74% of the total employment of the top 50 businesses.

This is followed by Worcester City which is home to 20%. In terms of financial performance, Wyre Forest saw the highest turnover growth at 113% as well as employment growth of 32%.

Mark Stansfeld, Chair of Worcestershire LEP contributed to the report, saying: “Worcestershire has seen impressive achievements in the past few years, being recognised as the number one in the country for productivity gains and higher-level workforce skills growth. The vision is to build a brand and make it a place people talk about not just in the UK but internationally.”

Fitness clothing brand Gymshark, previously based in Redditch, features at number four on the list with 76% average growth. CEO Steve Hewitt was interviewed as part of the report and believes that a lot of their success is down to “working as a local brand on a global basis”, with the team’s strong culture being the most important element of their business.

He also stated that they are facing infrastructure challenges within the region; a sentiment that was echoed by Ivan Knezovich, Managing Director of West Midlands Safari Park (Safariworld Holdings), which also features on the Top 50 list.  He said the West Midland Safari Park is a leader in the UK theme park industry when it comes to use of technology and software.

Robert Capper, Partner at Harrison Clark Rickerbys (also in the Top 50) spoke of the strong support they have had from the LEP, County Council and City Council with regards to their recent office move and the strong entrepreneurial spirit that exists within the firm.

Also interviewed was Vice-Chancellor of The University of Worcester, Ross Renton, who highlighted that working with businesses is a priority for the university, with many of their students taking part in placements, internships and graduate schemes throughout the region. It is a strategy that works, with an impressive 94.9% of their graduates going into work or education within six months of graduating.

Gary Rouse, Director at BDO and author of the report, says: “This year’s edition of the Worcestershire Growth Barometer shows that the mid-sized businesses in the region are continuing to expand at a very good pace. It is great to see the turnover of traditional sectors such as manufacturing going from strength to strength, but it’s also reassuring to see the depth and breadth of our region’s expertise. The development of the cyber security sector, for example, is definitely one to watch.”

He adds: “The interviews and discussions we had as part of the report showed that many businesses are seeing common challenges around attracting and retaining talent, as well as physical and digital infrastructure. It is crucial that investment in these areas is at the top of the agenda for Worcestershire.

“Overall, the report and its findings are very encouraging for businesses in the county and those looking to invest here.” 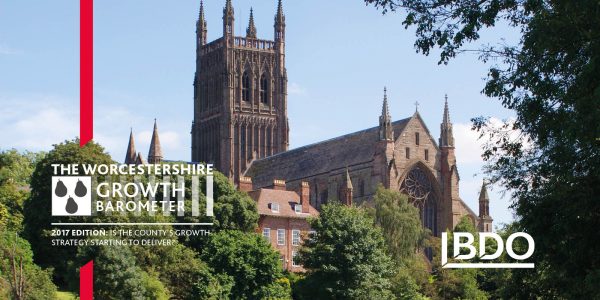