Pershore-based Styling Homes and Gardens is celebrating receiving a Silver Award for its Festival Garden at the RHS Malvern Spring Festival, as well as being named the People’s Choice.

The Spring Festival, which was featured on BBC2’s Gardeners’ World, was once again a huge success and it was anticipated to have attracted over 90,000 visitors during the four days between 5 – 8 May.

Inspiration for the ‘Hidden Gems of Worcestershire’ garden, which was sponsored by Worcestershire Local Enterprise Partnership (LEP), has been drawn from Worcestershire’s blend of technology with agriculture, and history with cutting-edge inventions, to celebrate the diversity and horticultural beauty of Worcestershire as well as innovation within the County.

Some of the garden’s impressive features include; life-size sheep sculptures made from wire as sheep were important to Worcestershire’s economy in the middle ages, a black and white colour scheme to reflect the world’s oldest continually published newspaper, the Berrow’s Journal, with a circular seating area that represents the concentric rings of a telescope and granite setts depicting the solar panels on a satellite designed at Malvern Hills Science Park.

Styling Homes and Gardens’ Creative Director, Nikki Hollier, who studied horticulture at Pershore College, designed and project managed the construction of the ‘Hidden Gems of Worcestershire’ garden. As well as Worcestershire LEP, a number of businesses sponsored the garden, including; Geomet, Digby Stone, Readyhedge, Frank P Matthews and Gardens 2 You. Following the awards, which saw Nikki Hollier receive the Silver Award, the voting was opened up to the public and ‘The Hidden Gems of Worcestershire’ Festival Garden won the People’s Choice Award.

Nikki Hollier, Creative Director of Styling Homes and Gardens, said: “It has been a pleasure to be able to give people the opportunity to view my Hidden Gems of Worcestershire garden and fantastic to receive so much interest and great feedback.”

“I am extremely happy to have received a Silver Award at the Festival, having only recently started a career in horticulture. As somebody that lives and works in Worcestershire, I wanted to produce a garden which celebrated both the County’s richness in its heritage as well as its cutting-edge technology. I would like to thank all of my sponsors for their support in making the garden happen as well as everyone who voted – it was a further honour to win the People’s Choice Award for my Festival Garden.”

Gary Woodman, Executive Director of the Worcestershire Local Enterprise Partnership, said: “Once again, the Malvern Spring Show was a fantastic event that shone the spotlight firmly on the County and congratulations to Nikki.

“The Hidden Gems of Worcestershire garden is a fitting tribute to the County as the design brings together both the heritage of Worcestershire and the innovation of our local businesses and highlights the many local ‘hidden gems’ that we should all be proud of.”

For further information on the Hidden Gems of Worcestershire show garden, visit www.stylinghomesandgardens.co.uk 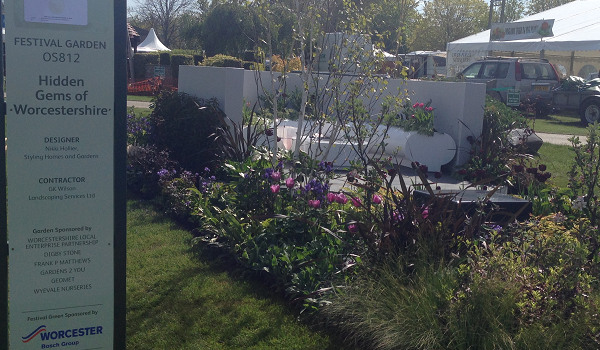