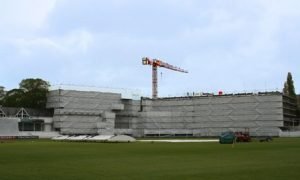 The four projects approved last year by Worcestershire LEP for over £3 million of funding under Round 1 of the Government’s Growing Places Fund  have all seen construction well under way and in one case already completed.

Worcestershire’s iconic New Road Cricket Ground is a hive of building activity,  where Growing Places funding has supported the development of improved club conferencing, administration and access facilities alongside a new 120 bedroom hotel also under  construction.

The Hoobrook Link Road in Kidderminster also benefited from Growing Places funding, in this case jointly with the Greater Birmingham & Solihull LEP, enabling construction to begin on the first phase of an enterprise park located at the former British Sugar factory site.

The two other projects approved under the scheme did not go on to use their Growing Places funding, but have moved forward at pace.  Worcester University’s Grove Farm business park and Evesham Vale Growers’ development of an anaerobic digester renewable energies plant near Fladbury, Pershore, were both subsequently able to negotiate favourable loan agreements in the commercial market.  Grove Farm is now well under construction and the roundabout access on A44 to the Fladbury Plant is completed and open to traffic.

Peter Pawsey, Chair of Worcestershire LEP, says: “This is still a great result for us.  The fact that the Growing Places Fund was prepared to make an award provided these two projects with the ammunition they needed to raise the necessary funds commercially.  They have been able to press on with their respective schemes, accelerating their progress to a point which would probably not otherwise have been achievable.  It also means that we have additional funds available for Round 2 of the scheme.  We are delighted that the Growing Places Fund has been so successful in Worcestershire, creating not only well over 100 jobs during construction but far more in the longer term”.

Following the WLEP’s Board Meeting last month, up to six further major development projects have been approved and earmarked for over £3 million more of funding under Round 2 of the Fund.  “We are now determined to quickly complete the necessary due diligence process in order that these projects too can get underway”, continued Mr Pawsey.  “There is much good development activity happening across Worcestershire and the WLEP is determined to encourage further work and therefore the creation of more jobs and benefits to the local economy”.