Stuart Allen, a hard-working associate of Malvern Business Academy was presented an award by star of Dragons’ Den Peter Jones CBE in a London ceremony on 5 July 2017.

Stuart, who has been an associate for the last year and is part of the team that runs the Peter Jones Enterprise Academy, won the Enterprise Tutor of the Year award after being nominated by the owner of Malvern Business Academy, Beryl Cuckney.

Stuart said: “I’m hugely honoured to win this award. The students on the programme inspire me to do a good job and to keep wanting to do better.”

Malvern Business Academy delivers a 14-week programme as part of the Peter Jones Enterprise Academy.  Their focus is on young vulnerable adults (19-24), most of whom have been in the care system and are dealing with homelessness.

Stuart received the award at the Peter Jones Enterprise Academy’s annual graduation ceremony at Freemasons’ Hall. Students and staff from Further Education colleges across the country came together to celebrate their achievements over the past year. All graduating students collected scrolls from Peter Jones on stage during the ceremony, and Stuart was one of a select few people given an award.

Managing Director of the Malvern Business Academy Beryl Cuckney said: “It is wonderful that Stuart has won this award and it is a great way for us to thank him for the sacrifices he has made, both in terms of time and finances. He has given a lifetime of opportunities to the young people in his group that they simply would never have access to without his dedication, commitment and financial generosity.”

Peter Jones Foundation CEO Jonny Sobczyk, said: “This programme could not have been run without the support of tutors like Stuart, whose mission is to help young vulnerable people so they can believe in themselves and transform their lives. I’m delighted that he has been recognised with this award.”

The Peter Jones Enterprise Academy, run by the Peter Jones Foundation, is a nationwide network of colleges that deliver specialist courses in enterprise and entrepreneurship. Students are encouraged to set up their own businesses, from which they gain real-life experience of running their very own company.

During the graduation ceremony, the students and staff received a royal visit from HRH The Duke of York, KG, Patron of the Peter Jones Foundation, as well as video messages of congratulations from various celebrities, including James Corden, Jack Whitehall, Holly Willoughby and Michael McIntyre. 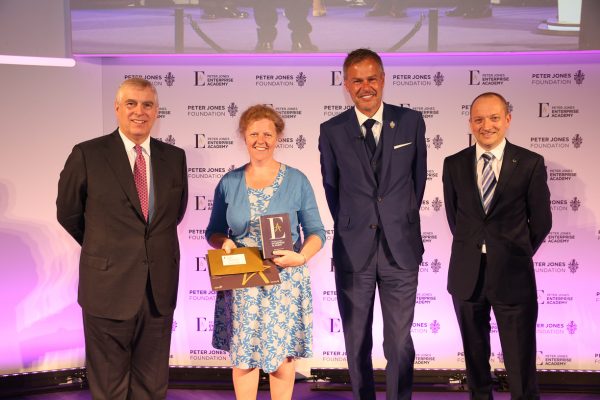