Some of Worcestershire’s best apprentices, employers, training providers and schools have been announced as finalists at the Worcestershire Apprentice Awards 2016 and a limited number of tables remain on sale.

Finalists for each award, businesses and guests will attend The Worcestershire Apprenticeship Awards at 6:30pm, on Thursday 17 November at the Tree Tops Pavilion, West Midland Safari Park where the winners in each category will be announced.

The awards will be presented by business owner and winner of the first series of BBC’s The Apprentice, Tim Campbell MBE, and promise to be even bigger and better than last year’s awards which saw over 300 people in attendance.

A limited number of tables and spaces are on sale and spaces at the high-profile event. Seats cost £85 each and a table of 10 can be bought for £800 and those who wish to attend, are being urged to secure their places at the earliest opportunity.

A total of twelve awards will be given out to this year’s winners at the Worcestershire Apprenticeship Awards. As well as awards that recognise the apprentice employers, schools and training providers, three of the categories to be awarded celebrate local apprentices. These are:

Christina Trouton – Worcestershire Health and Care NHS Trust – Worcester
Christina has worked successfully across two different information roles within the Health and Care NHS Trust. Working within different teams has enabled Christina to grasp a huge variety of working practices and has increased her knowledge of what happens in the background of the NHS. Her manager stated that “Christina has demonstrated time and time again, great personal development and maturity in every task she has been given.”

Jamie Stampe – The Hop Pole – Bewdley
Through his job and the apprenticeship, Jamie has been motivated to pursue a career he would have never have considered or thought he could do. He has been motivated by his passion for food and has taken every opportunity he can to build on his experience and create great menus and dishes. His employers have said how he is contributing to a profitable business and is now motivating his own staff to follow in his footsteps: “Jamie never boasts about his achievements and is quietly ambitious but a real inspiration to all new apprentice chefs.”

Justin McKeon – Malvern Instruments – Malvern
Justin provides invaluable support to the Accounts Payable and Receivable teams at Malvern Instruments and is always eager to take on more responsibility. His employers have said how he is an excellent role model in that he promotes his apprenticeship experience to others. They added that “Justin has demonstrated an outstanding performance during his 10 months with the company and members of the finance team speak very highly of him and of the work he undertakes.”

Christian Warwick Frost – Yamazaki Mazak – Worcester
Christian said how his greatest accomplishment was his promotion from apprentice to team leader – taking responsibility for a team of 7 machinists as well as another apprentice. His dedication and hard work has shown others that completion of an apprenticeship is not the end of their training but merely the beginning of a long and successful career. His employer said Christian is “an inspiration and role model to other apprentices as they could see what could be achieved if they showed the same level of dedication”.

George Stephens – Mettis Aerospace – Redditch
During his apprenticeship, George showed an enthusiasm for engineering and manufacturing and actively sought opportunities to demonstrate his ability and to manage projects and tasks. Mettis Aerospace said how George’s very positive ‘can-do’ attitude led him to complete his apprenticeship almost 12 months ahead of schedule. His employer said “I have no doubt that George will continue to progress within the business – he is a tremendous young man who stands out for all of the right reasons.”

Pippa Dressler-Pearson – Southco Ltd – Worcester
As an engineering apprentice, Pippa has made great contributions to the business. As well as managing design projects, Pippa recognised the confusion faced by new people joining her organisation and created a guide book to help new engineers, students and apprentices to rapidly adapt to their new surroundings. Her training provider said how she can be a role model for young people, stating that “the high standard Pippa has set means she will be a great ambassador for apprenticeships”.

Alex Tyrer – Sanctuary Group – Worcester
Alex’s commitment to his role has enabled him to contribute to the success of his team by taking the lead on key activities and meeting challenging targets. He has been a buddy to other apprentices, helped to induct new students and took part in Sanctuary’s volunteer scheme to mentor a group of younger children. His employers have said how he is a well-liked, conscientious member of the team and have really enjoyed working with him.

Evangelene Brookes – The Community Housing Group – Kidderminster
Working within HR, Evangelene has delivered various improvements and cost savings to the team, as well as leading on the staff survey to recommend ways to improve staff engagement. Evangelene also mentors other apprentices and supports them with developing their skills in work planning, organisation and communication. Her hard work and dedication was recognised by her employers who presented her with an ‘outstanding achievement’ award in 2015.

Jessica Morris – Bishop Fleming – Worcester
Jessica works as an assistant with the Business Services team and strives to complete her work to the best of her ability and as efficiently as possible. Jess also played a key role in the mentoring and training of two new apprentices and her patience and professionalism has been key to helping with their development. Her employer said how Jess displays “a high level of maturity in the way that she conducts herself”, “ambition to learn and develop” and is “always willing to help”.

Gary Woodman, Chief Executive of Worcestershire Local Enterprise Partnership, said: “Each year, Worcestershire Apprenticeship Awards highlights the successes of our 10,000 active apprenticeships and the hugely positive impact that they have for our workforce. I look forward to celebrating the fantastic achievements of our local apprentices at the awards on 17 November.”

Cllr Dr Ken Pollock, Cabinet Member with Responsibility for Economy, Skills and Infrastructure at Worcestershire County Council, added: “The number of our local apprentices continues to grow and I look forward to celebrating their incredible achievements at the Awards. The County boasts many excellent apprenticeship opportunities and I would encourage any business interested in hiring an apprentice to visit the Worcestershire Apprenticeships website.”

For a full list of finalists for this year’s awards and for more information on employing an apprentice, visit the Worcestershire Apprenticeships website.

Those interested in attending the Worcestershire Apprenticeship Awards are being encouraged to book a seat or a table at their earliest opportunity as spaces are limited. To book a table or secure a seat at the awards, email awardsbookings@worcestershire.gov.uk. 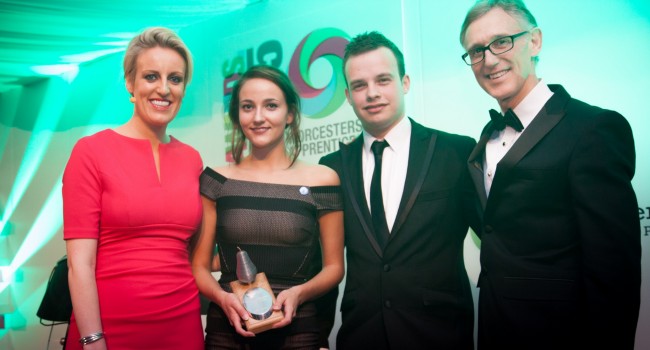