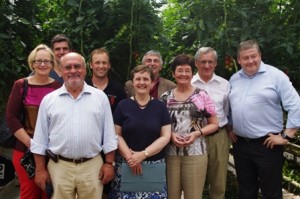 A delegation of 10 MEPs, including Members from the UK, Germany, Portugal  and Belgium, visited Evesham Vale Growers (EVG) in July 2013 as part of a three day tour to the West Midlands.  After viewing their packaging processes at EVG’s Blackminster facility, they then witnessed the growing and energy producing facilities at Fladbury.

The LEP’s Chair, Peter Pawsey,  joined the delegation for the tour of EVG at Fladbury,  which was led by Matt Powell, Operations Manager.  On show were 12 acres of glasshouses, used entirely for tomato growing, surrounded by 2,000 acres of outdoor salad vegetables production.

Of particular interest to the group was the firm’s innovative renewable energy plant.  Its anaerobic digester turns green waste from the crops into energy that can be used both to heat and light its greenhouses, the excess being sold back to the National Grid.

Peter Pawsey said: “Evesham Vale Growers’ pioneering work in turning green waste into energy is a fantastic example of a problem being turned into a solution.  The company was previously faced with a huge volume of green waste that would have to be sent for expensive and scarce landfill disposal.  Instead their tomato greenhouse now has a carbon footprint of zero and EVG are producing their own cheap heat and power.”

He continued: “At the LEP, we are always looking for opportunities to tell the world about the innovative work being carried out by Worcestershire businesses.  This visit by the group from the European Parliament’s Agriculture Committee provided us with the chance to do just that.”