Mike Ashton, Chief Executive of Herefordshire & Worcestershire Chamber of Commerce, has announced his planned retirement and will step down as Chief Executive on Friday 31 March 2017. Mike became CEO in May 2007 and has been instrumental in taking the company forward as a leading Chamber which was recognised as the British Chambers of Commerce Chamber of the Year in 2013. More recently, the Chamber achieved the Investors in People (IIP) Gold Award, an outstanding achievement which recognises the company’s continued commitment to its staff.

This year has seen the biggest Business Awards Dinner held at the Worcester Arena with over 550 people. Last week, the Chamber held its biggest ever Business Expo at the Three Counties Showground with over 1,000 attendees. The Chamber now has responsibility for delivering Visit Herefordshire, Visit Worcestershire, Worcestershire Business Central and of course, the Department for International Trade (DIT) contract for Export support.

Mike Ashton commented: “Herefordshire and Worcestershire have a significant number of excellent businesses and it has been a pleasure and privilege to support them and work with them over the years. I am, of course, here until the end of March and look to continue to build on the strengths of the Chamber, particularly building those strong relationships with the public sector. Beyond my CEO role and into 2017/18, I look to continue to do some work in Worcestershire supporting Inward Investment opportunities.”

Gary Woodman, Chief Executive of Worcestershire Local Enterprise Partnership, said: “Mike has had a truly fantastic impact on businesses across all of the county. In his 10 years as CEO, the H&W Chamber of Commerce has grown its reputation significantly and to achieve a British Chambers of Commerce ‘Chamber of the Year’ award in 2013 just goes to show the level of progress under Mike’s leadership. I am sure I join the rest of the local business community in wishing Mike the best for his future after retirement.”

Mike leaves the Chamber in a strong position with two newly appointed Board Members.  The Chair, Jim McBride, and the Board, will be looking to recruit a successor during the coming months. 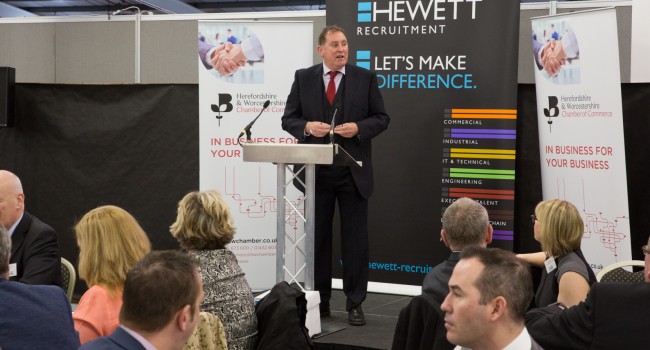