As part of raising the profile of the county, BetaDen’s Clive Summerfield has been featured as part of the #MoreInWorcestershire campaign.

Clive’s feature forms part of a six week campaign that is based on a series of real-life case studies that showcase the benefits of living, working and running a business in Worcestershire.

The campaign has been advertised at a number of high profile locations including Birmingham Airport, London Paddington Station, Euston Station, Birmingham International Station, among others.

Clive Summerfield’s story can be found below. To join the conversation on social media, post using the hashtag #MoreInWorcestershire

For further information on the Worcestershire brand, visit the website www.oneworcestershire.com

Imagine, you’re living in Sydney, Australia. You enjoy your work at the successful business you founded, but you’re still searching for something more. So, what do you do next? You move to the UK to set up the European arm of the business on Malvern Hills Science Park (MHSP).

Clive Summerfield is leading Auraya Systems’ European operation. The company specialises in advanced voice biometrics technologies. If you think this sounds clever, you’d be right, it is. It’s technology that analyses voices. Like fingerprints, voices are unique to their owner. Being able to identify someone from a phone call or a voice sample has huge benefits, particularly for the security sector. Auraya has already licenced the tech to major UK companies like Amazon, Vodafone and Fujitsu.

Malvern is the UK’s silicon valley

Clive’s decisions to move to the UK are three-fold. First, he considers Malvern to be the ideal place. You needn’t look beyond MHSP – the UK’s silicon valley – to understand why. MHSP promotes itself as a combination of brains, buildings and finance, which just happen to be the perfect raw ingredients for high tech companies, like Clive’s, to prosper.

Part two of Clive’s thinking is that Voice Biometrics – another company he set up in Worcestershire – was awarded a grant from BetaDen. Supported by the Worcestershire Local Enterprise Partnership, BetaDen is the county’s primary dedicated tech accelerator for entrepreneurs and businesses. Essentially, the grant it awarded will help Voice Biometrics grow rapidly.

Clive appreciates that the support he has received for his business in Worcestershire has made a real difference and made it possible for him to succeed.

Clive’s third reason is more emotional: he grew up in Malvern and remains passionate about the area.

Worcestershire is second to none

When asked why people would base themselves or their businesses in the county – as opposed to other areas – Clive’s response is emphatic:

“People would choose Worcestershire because the lifestyle is second to none here. It’s to do with schools and the easy-going nature of the place. You’re sitting in an area of outstanding natural beauty. You can engage here with the food, the agriculture, the arts and music scene. There’s always something to do. The people are engaging and welcoming.  In Worcestershire you can have that work/life balance that we’re all striving for,” he enthuses.

Having lived and worked all over the world, he is very well-placed to judge Worcestershire as “a truly friendly place”.

Best of both worlds

Clive hasn’t chosen idealism over economics: he thinks the area offers the best of both worlds:

“You don’t have to live in London to make your fortune. Here, you can make your fortune and have a lovely lifestyle. And there is the talent to make it all happen in Worcestershire,” he says with passion.

“The fact that you’ve got these high-tech, high-value industries popping up naturally in Worcestershire bodes well for the future.

“One thing I’m very impressed with here, against observations I’ve had from other places I’ve lived, is the support for start-up businesses here,” Clive adds. “Compared to similar schemes I’ve been involved with overseas, the infrastructure and the support for enterprising local businesses is far stronger. This is a Worcestershire thing.”

Asked about MHSP, Clive explains: “There are some very, very talented people here, driving the development of high-tech, high-value industries in Worcestershire. It has all the ingredients to strengthen its reputation as a very high growth part of the country, especially around cyber security and security technologies.” 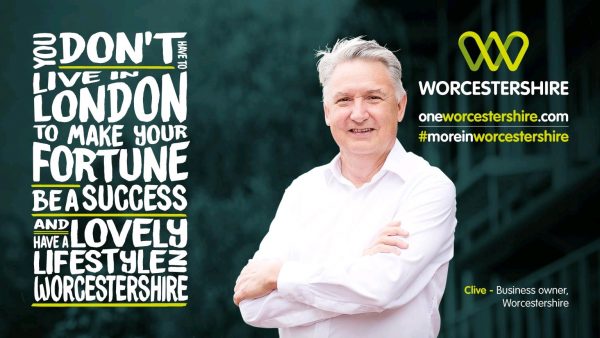 Worcestershire commercial technology accelerator BetaDen, which is based at Malvern...

A leading Worcestershire employment lawyer has warned businesses across the...

Camping equipment specialist, OLPRO, has been named the winner of the...