Work has started on a £1.2million scheme to reduce the impact of flooding in Worcester city centre.

This scheme will enable New Road to stay open for longer during major flood events meaning people trying to get in and out of the city will face fewer problems. The severe floods in Worcester in 2007 and 2014 caused huge disruption to residents and businesses.

The improvements will raise almost 200metres of New Road and its footpaths outside the Cricket Club by nearly 400mm (1¼ ft), and improve the traffic lights island at the City end.

The project will improve the resilience of the area to flood events by allowing New Road to be converted to take two-way traffic, in and out of the city, while surrounding roads and land continue to flood.

Once the works are completed, the likelihood of New Road being closed to flooding will be significantly reduced, whilst also helping to ensure that flood water recedes much quicker than it currently does.

The project itself has been fully endorsed by the Environment Agency and the project development and planning process.

A majority of the funding for the project is coming from the Worcestershire Local Enterprise Partnership (LEP) who have invested a total of £4million of the Government’s Growth Deal into flood alleviation measures across Worcestershire.

Councillor Tony Miller, Cabinet Member with Responsibility for the Environment, said: “This scheme will help to keep Worcestershire moving during periods of severe flooding, allowing residents and businesses to function as normally as possible.

“The floods in 2007 and 2014 had such a huge impact on the city that we needed to review our flood alleviation strategies. These works on New Road are part of our ongoing works, across the county, to reduce the impact of future flooding to residents and businesses.

“The works do mean the loss of seven trees and we are aware of some residents’ concerns over this. However, 50 trees will remain along New Road and the look and feel of the road, no matter which way you approach the bridge, will continue to be very much the same as now.

“We will be planting 13 new trees in nearby Cripplegate Park to compensate for the removal of the seven trees.”

Gary Woodman, Chief Executive of Worcestershire LEP, said: “We are well aware of the financial impact that flooding has had for many businesses across the county in previous years.

“Flooding has hit Worcester and the wider county particularly hard in terms of restricting tourism, resident and business movement. The New Road scheme improvements are further helping to build flood resistance so that the city and county can continue to flourish in times of flooding, allowing local businesses to continue to prosper.

“The financial impacts of the 2007 and 2014 floods were significant with the national media creating the impression that Worcester was closed for business. Our £4million investment into flood alleviation projects is therefore vital to the economic vibrancy of the county.” 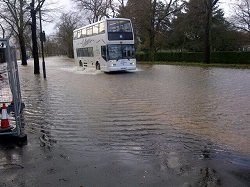 Pictured: Worcestershire Local Enterprise Partnership (LEP) have invested a total of £4million of the Government’s Growth Deal into flood alleviation measures across Worcestershire.

A shortage of office and industrial units in Worcestershire, coupled...

With 120 Exhibitors from various business sectors and around 800...