Plans to transform a well-known Worcester building into state-of-the-art teaching facilities for health students have been approved by City planners.

The University of Worcester is developing the former Worcester News building, known as Berrows House, on Hylton Road into dedicated space to educate the next generation of healthcare professionals, including through its proposed new Three Counties Medical School.

Attractively clad, flooded with natural light from the impressive North light roof structures, the large two and three storey 1965 building, designed by Austin-Smith Salmon-Lord Partnership, will become an architectural highlight on the St John’s bank of the River Severn.

This work was funded through a £3m grant from the Worcestershire Local Economic Partnership, as part of the Government’s £900 million Getting Building Fund, for infrastructure and ‘green’ works at the University’s Severn Campus. Awarded in the summer, this has been match funded by the University. The £6m total is also being used for other modern green initiatives, demolition works and infrastructure provision, as well as initial work on the former Worcester News building which is to be to transformed into a major centre for health education, including stripping its interior and removing asbestos.

University Vice Chancellor and Chief Executive, Professor David Green CBE, said: “The development of this facility will be key in providing inclusive and inspiring learning facilities to educate the next generation of health professionals that this Country so badly needs. This new Centre for Health and Medical Education will bring much-needed jobs and prosperity to the City, creating hundreds of new opportunities to gain a first-class education and vital professional qualifications in a wide variety of health professions.”

The plans, drawn up by Midlands-based Glancy Nicholls Architects, include a state-of-the-art anatomy laboratory, a suite of GP simulation rooms, and a range of general seminar and teaching rooms. There will also be offices, break-out spaces for group study and a café. Stepnell has been appointed as contractors to develop the building, which will open at the end of 2022.

Richard Wakeford, main board director at Stepnell and project sponsor, said: “We were delighted to be awarded this project through our framework agreement with the University after recently completing its Art House building. Our Midlands team, led by regional director Adrian Barnes, are committed to working in partnership with both the University and our local supply chain and we are really looking forward to delivering the Berrows House scheme to the highest possible standard.”

Mr Barnes said: “We’re incredibly excited about being involved in this project and supporting the University in creating high-quality teaching facilities for trainees. Now more than ever, we need to support investment in the healthcare sector – so providing essential learning spaces that contribute towards the development of the next generation of medical professionals is a great way for us to do this.”

Low or Zero Carbon technologies will be utilised throughout the building in line with the University’s environmental and sustainability ethos, with the aspiration of achieving RICS SKA Gold. This top environmental standard for refurbished buildings is rarely achieved but was met by the University in its acclaimed creation of the Art House in Castle Street, from the former 1930s Austin House Motor Garage and Showrooms. The University, named Sustainability Institution of the Year for the UK and Ireland in 2019 and globally commended at the United Nations in 2020, has consistently been one of the UK’s leading environmentally responsible universities.

The building will also be highly inclusive in line with the University’s commitment to genuine inclusion by design, which saw the nearby University of Worcester Arena win The Guardian’s Buildings That Inspire award in 2015.

The fully refurbished building will be a most significant addition to the University’s Severn Campus, whose focus is on health, wellbeing and inclusive sport.

The University has an outstanding reputation for educating healthcare professionals and earlier this year was awarded the largest allocation of additional health training places in the Country. As well as those studying across the University’s extensive suite of healthcare courses, including Nursing, Midwifery, Paramedicine, Physiotherapy, Occupational Therapy and Physician Associates, the University is hoping that the new building will also provide a centre for its planned Three Counties Medical School, which is currently progressing through the General Medical Council’s approvals and assessment procedures. The University’s application is well advanced and is currently at Stage 4. 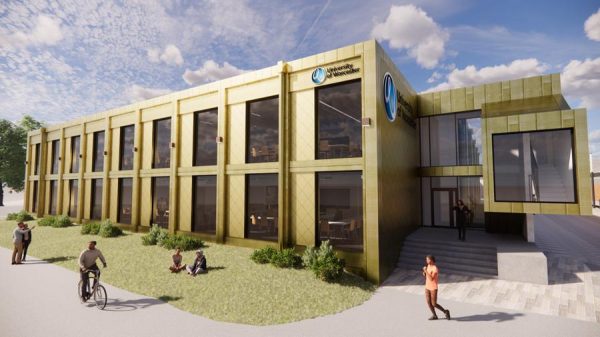