The park, just off junction 6 of the M5, will provide up to 1.5 million sq ft of accommodation in a range of high quality business units. They have been designed for a variety of employment uses to include technology, manufacturing, industrial and warehousing.

Gerard Ludlow, Director of Stoford, said: “We’re delighted to have been able to celebrate the start of construction of the first units at Worcester Six with our development partners Liberty Property Trust and Worcestershire County Council and Wychavon District Council.

“Worcester Six is the first large-scale development in Worcester for 10 years and brings with it considerable investment in the area and opportunities for growth. With work now starting we’re on target for a summer 2017 completion.

Robin Vaughan, associate director at Liberty Property Trust, said: “We are pleased to be developing a product that will be available to end users next year and about which we are ready to have meaningful discussions.”

Gary Woodman, Chief Executive of Worcestershire LEP, said: “It is great to see that work is underway on the development of Worcester Six. The key employment site will help to create thousands of new jobs and will therefore have a hugely positive impact on the local economy. Worcester Six benefits from excellent connectivity and road transport links and really is an ideal location for business investment and opportunities.”

Cllr Ken Pollock, cabinet member for economy, skills and infrastructure said: “I am delighted to see work starting at the Worcester Six site.  The County Council has been championing business growth at this site for some time and as one of the key game changer sites, it will make a tremendous difference to the economic landscape in the county.  This site makes the most of our transport infrastructure and will provide much needed business development space as well as attracting new business in to the area, which ultimately means more jobs.  So good news all round.”

Liberty Property Trust and Stoford were granted detailed planning permission by Wychavon District Council in July for units of 160,000 sq ft and 45,000 sq ft, the first to be built at Worcester Six.

Worcester County Council expects the wider £120 million park to create around 5,000 jobs once the whole development is complete and give Worcestershire’s economy a major boost.  Worcester Six is also one of four game changer sites identified in the county’s Strategic Economic Plan (SEP) – key employment sites seen as important in driving the county’s economic future prosperity.

Work on the £10 million infrastructure package for the park is making good progress with the upgrade to Pershore Lane now complete. These works were funded by the Worcestershire Local Enterprise Partnership through the Government’s Growth Deal to improve traffic flow to junction 6 of the M5 motorway as well as provide access to Worcester Six. Utilities for the site, including gas, electricity and water have been installed by civil engineering and building firm McPhillips, which tunneled under the M5 to connect the site the services. 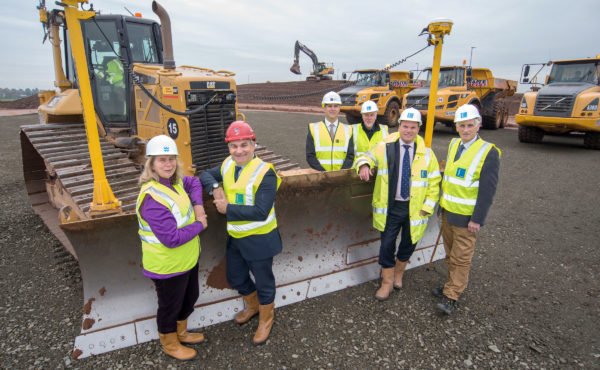