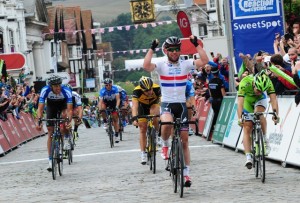 Worcestershire LEP is pleased to confirm the return of Britain’s biggest professional cycle race, The Tour of Britain, to the county this September as we host Stage Four of the race.

Stage Four, on Wednesday 10 September, will start in the heart of Worcester City before travelling through Worcestershire via Great Malvern, Upton upon Severn, Pershore, Evesham and Broadway.    The riders will then continue over the county boundary into Gloucestershire before finishing the day in Bristol after 182 kilometres of racing.

Exact details of the route are still being finalised and will be announced at a regional launch event to be held in the spring (date to be confirmed).

It will mark the first return of The Tour of Britain to Worcestershire since 2008, when the county held stage starts of the UK’s national Tour two years in succession.

Peter Pawsey, Executive Chair at Worcestershire LEP, said: “Worcestershire is thrilled to be hosting a stage of this year’s Tour of Britain.  The route through the county will take in some of the most picturesque, undulating and historic parts of south Worcestershire, giving those who aren’t familiar with the county an opportunity to glimpse what we have to offer.  What’s more it’ll offer a challenging but ultimately enjoyable ride for all the Tour participants.”

“We look forward to returning to Worcester and to bringing The Tour of Britain back to the county of Worcestershire this September”, said Race Director Mick Bennett.  “Stage Four is sure to be one of the most popular of the 2014 race, joining the cities of Worcester and Bristol with a picturesque route.”

The 2014 Tour of Britain will begin in Liverpool on Sunday 7 September, finishing eight days later in central London.

More information on the 2014 Tour of Britain can be found here.