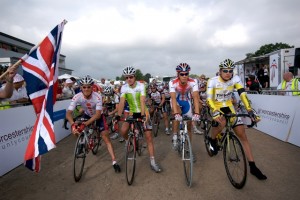 An event to launch the Worcestershire Stage of this year’s Tour of Britain will be held in Worcester on the evening of Thursday 19 June.

One of Worcester’s largest employers, Sanctuary Group, has also confirmed its sponsorship of the Tour through a Worcester schools engagement initiative.  The leading housing and care provider will be hosting cycling safety activities at local schools in the build up to the event.

The launch will be held at The Hive – the point from which the Race itself will start in September.   It will be the first opportunity for the public to hear details of the route that the Race Stage will take around Worcester City, before moving onwards through Malvern, Upton, Evesham, Pershore and Broadway, then passing into Gloucestershire and finishing in Bristol.

Riders from the NFT Pro Cycling team will be in attendance at the Launch, including Stockton-on-Teme resident, Sam Williams.

Gary Woodman, Executive Director of Worcestershire LEP, says: “The return of the Tour of Britain to Worcestershire offers us a perfect opportunity to profile the county and all that it has to offer, both as a tourist and business destination.  We are delighted to have such a showcase for Worcestershire and we are confident that the event will draw massive support and inject significant finances into the local economy. ”

Full details of the Stage route through Worcestershire once it leaves Worcester City are still being finalised and will be announced at a later date.

The Race Stage provides a great opportunity for businesses in Worcestershire to showcase themselves.  Those interested in sponsoring the Tour are invited to contact the Worcestershire LEP office or email: jan.bailey@wlep.co.uk.

Further details about the Tour can be found here.