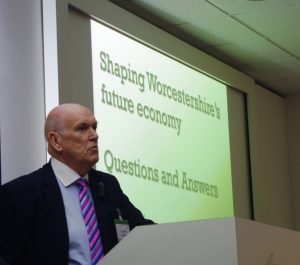 Government has today (7 July 2014) announced its funding for capital projects in Worcestershire for 2015/6 following receipt and analysis of the county’s Strategic Economic Plan (SEP), submitted at the end of March.

Worcestershire Local Enterprise Partnership (WLEP) will receive over £13 million out of the national £2bn ‘single pot’ for the year together with indicative allocations of nearly £40 million in the following years.

Within the Worcestershire Strategic Economic Plan a total of up to £48 million was requested for 2015/6 but, as had become clear in early April, the total fund had been more than three times oversubscribed and also that about half the total had been pre-allocated on national transport schemes.  The allocation will now allow a number of projects to progress though some will require re-programming and re-scaling.  Together the WLEP and Central Government have agreed to co-invest in the following jointly agreed priorities:

In addition, Government has responded positively to the WLEP ‘asks’ of it.

WLEP Executive Chair, Peter Pawsey reacted: “This is a good and fair deal for Worcestershire which we welcome, but it will require all partners to be creative and some choices will have to be made.  Of course we would always have liked more cash but the allocated fund was massively oversubscribed and together with other funding streams, including those from Europe and from County and District Councils’ resources, we can together  make some very significant progress on our priority schemes.”

He continued:  “The Deal  is not all about money however as Government’s strong  positive responses to the WLEP’s ‘asks’ give us great encouragement that we can together make some real progress on issues that have previously been barriers to growth and sometimes a logistical nightmare.  Worcestershire has massive untapped potential and WLEP, including its local authority partners, is determined and committed to pushing on with our growth programme.  That programme as set out in the SEP is for 10 years and was never deliverable overnight, but it is based on the considerable economic vitality of the county’s key sectors including Agri-Tech, Advanced Manufacturing and Engineering, and Cyber Security and IT.

“Our total bid for the 10 year programme was for £280 million and we now have a commitment from Government for funding of about £53 million across the first few years of that programme.  On top of that the County Council and local authorities have already pledged a further £13.5 million towards relevant capital projects over the same period and we expect such funding to attract a private sector investment leverage of up to twice that total.  Finally we should not forget the £55 million or so coming from Europe over the same period.”

Simon Geraghty, Worcestershire County Council’s Cabinet Member for Economy, Infrastructure and Skills said: “This is great news and backs  the ambitious  10 year plan that was devised  by local government and  businesses working together through Worcestershire LEP.  The allocation over the next five years is significant and allows investment in key schemes across  the County  in  rail, road, broadband and flood alleviation. Without the credibility of  our partnership work, involvement of businesses in the bid and strong track record of infrastructure improvements I doubt we would have achieved this level of funding  from government.  Looking to the future there are exciting times ahead and we will now work alongside others in bringing these projects to reality thereby boosting the local economy and tackling key transport bottlenecks .”

In line with all other 38 LEPs, the Worcestershire LEP is still in negotiation with Government on details of the final Local Growth Deal and it is accepted that priorities may change with the passage of time.

Full details of Worcestershire’s Growth Deal can be found in the attached Fact Sheet.