Work has now started on preparing the site where the new Worcestershire Parkway Regional Interchange Station will be located.

Worcestershire County Council’s plans for the new station were given the official stamp of approval by the Department for Transport at the end of January 2017.

Specialist rail contractor Buckingham Group Contracting Ltd were recently awarded the design and build contract for the scheme by the Council. This includes carrying out de-vegetation work to allow the site to be prepared ready for development.

Following completion of the clearance work and approval of final design work in summer 2017, construction will begin in autumn 2017.

Due to the sensitive ecological nature of the area, a pre-construction ecology survey was completed before works began and an ecologist will be on site at all times during the de-vegetation.

Marc Riley, Framework Director for Rail at Buckingham Group, said: “We are delighted to be working with Worcestershire County Council to deliver the design and build contract for the construction of a new and exciting landmark for the County. We look forward to working with key stakeholders, bringing our experience and knowledge from previous schemes in order to deliver a station that will make a significant difference to the area.”

Worcestershire Parkway forms part of the County Council’s Local Transport Plan and Worcester Transport Strategy and is pivotal to its ambitious growth plans to boost the County’s economic value to £2.9bn, creating 25,000 new jobs by 2025.

Cllr Ken Pollock, Cabinet Member for Economy, Skills & Infrastructure, said: “The start of work on site marks a significant milestone and demonstrates continued progress on this vitally important scheme. Once complete, the station will provide improved rail accessibility and connectivity to and through Worcestershire. In turn, this will attract inward investment into the county and create new jobs.”

The majority of the budget for the scheme will be self-funded through station car park fees and access charges levied on the Train Operating Companies, along with £8.3m from Worcestershire Local Enterprise Partnership through the Government’s Growth Deal.

Gary Woodman, Chief Executive of Worcestershire Local Enterprise Partnership, said: “It is great to hear that work has started on the development of Worcestershire Parkway Station. The station will modernise our rail infrastructure, providing local companies with access to the high-quality connectivity needed for continued business expansion.”

Construction of the station is due to be completed in winter 2018/19. Once operational, it will make it easier for many more passengers to use the County’s vital ‘North Cotswold’ rail link from Worcester to Oxford and London Paddington. Worcestershire residents will also be able to catch regular long-distance cross country services which currently pass through the County on the Gloucester to Birmingham route without stopping.

The station will also create an integrated hub between bus, road and cycle routes, reaffirming the importance of the current improvements to the Southern Link Road and development of Worcester Six Business Park. 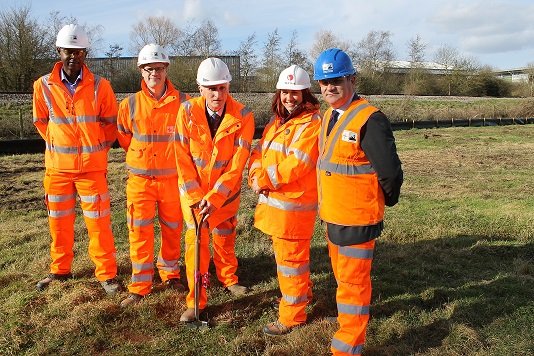