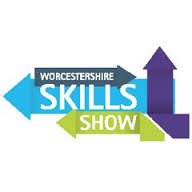 Employers, training and apprenticeships organisations and young visitors have praised the organisers of the annual Worcestershire Skills Show 2017, which attracted more than 1,600 young people and students.

This year’s event was the third held annually, with plans already under way to hold it again next year. Over 50 businesses and education providers showcased a variety of roles within business, such as Marketing, Finance and HR, for pupils and students from high schools and special schools across the county. The show offered young people the opportunity to meet with employers, who provided them with the opportunity to ‘have a go’ at a range of activities and see the type of careers available to them locally.

They were also the first to sign a pledge wall, committing each of their organisations to “support the development of Worcestershire’s future workforce.”

Clare Marchant said: “The Skills Show was a fab demonstration of how committed Worcestershire’s businesses and schools are to do their best for young people; it showed the wealth of opportunities open to them.”

Mr Arntzen said it was vital for companies like Worcester Bosch that more of the county’s bright young people were encouraged into STEM careers – Science, Technology, Engineering and Maths – to address a skills shortage in this area.

Mr Falk added: “Events like The Skills Show give people a sense of the reality of worklife.”

Cllr Ken Pollock, Worcestershire County Council’s cabinet member for Economy, Skills and Infrastructure, added: “This was a great way for young people to get inspired about an industry or career path and the employment opportunities within Worcestershire. Each year it gets better with more businesses taking part and more things to do.”

The Careers and Enterprise Company are creating “Enterprise Adviser” networks nationally, where business leaders work with individual schools to support the delivery of careers advice and increase employer interaction in schools, which in turn supports the ongoing development of our future workforce.

At the event young people got the opportunity to undergo a mock interview with business leaders. The idea was to get a feel for a real life interview setting and to take some of the myths away about interviews being terrifying.

Among the ‘mock-interviewees’ was Molly, 16, from Hanley Castle High School, who said she was really encouraged by the activity. “It wasn’t too scary, though it felt like a real interview. It gave me confidence for the real thing.”

One of the big draws was Squareye Television Ltd’s stand, where young people could try their hand at news or weather presenting.

Jon Essex, Managing Director, said: “We were very pleased to support The Worcestershire Skills Show for the third year running.

“Our stand gave the students a real life hands on experience of television production both in front of and behind the camera. The students enjoyed having a go at reading the weather from an autocue and being keyed onto an animated weather map background, which was then sent live to all the screens at Worcester Sixways. The whole event was a great success and we are very proud to have been involved.”

Comments from visitors and partner organisations on Twitter testified to the event’s success.

A full rundown of tweets on the day can be found here.