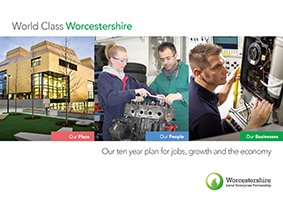 Worcestershire LEP has revealed its top priorities for projects to be funded from the Government’s Single Growth Fund for the period 2015-16.

Following submission of the detailed ten year Strategic Economic Plan (SEP) for Worcestershire on 31 March, Worcestershire LEP – in common with all 38 other English LEPs – was asked by Government to identify and prioritise projects specifically for 2015/16 funding.

Among the top priorities are the four ‘Gamechanger’ employment sites: Worcester Technology Park, Malvern Hills Science Park, South Kidderminster Enterprise Park, and Redditch Eastern Gateway, together with Worcestershire Parkway Station, phased improvements to the Worcester Southern Link Road and a package of highway improvement projects across the south of the county, designed to avoid a repeat of this year’s closures due to flooding.

Other priority schemes identified include the expansion of Evesham Vale  Business Park; an Enterprise Centre to support the growth of small and medium sized enterprises (SMEs) located at Worcester Technology Park; and funding to support increased training and the expansion of engineering apprenticeships.  Support for the further roll out of county-wide broadband has also been requested as has support for enhancement projects in Worcester City Centre, including a contribution towards the proposed arts and cultural quarter.

Peter Pawsey, Executive Chair at Worcestershire LEP, says: “Our Strategic Economic Plan outlined a ten year plan for jobs, growth and the economy in Worcestershire.  As required by Government, we have in recent weeks worked hard to prioritise those projects that, if funded, can be delivered during 2015/16.  These have now been submitted to the Department for Business, Innovation and Skills for consideration and our negotiations with Government continue.

“We are still expecting that the outcome of such discussions will be finalised and the final funding allocations for Worcestershire announced by BIS in late July.”

The full Strategic Economic Plan and the Summary Document are available from this website.